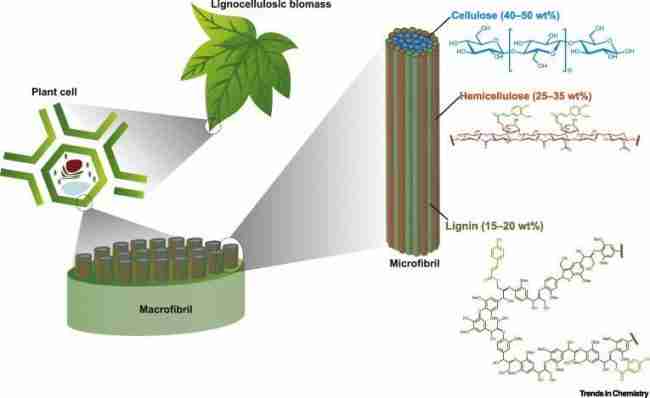 The world’s most abundant renewable resource is biomass (wood and nonwood or straw), of which the three main components are cellulose, hemicellulose, and lignin.

In woody biomass, cellulose is the most abundant biopolymer, followed by lignin, which accounts for 15–40 wt % of wood.Lignin is also the largest natural resource of aromatic compounds.

Dispersants and concrete additives (plasticizers) account for the widest use of lignosulfonates and sulfonated lignin. This is due to their appropriate molecular weight (10 000–50 000 g mol−1) and anionic charge density (0.1–0.9 meq g−1), stemming from the presence of functional groups.

An increase in the molecular weight, phenolic hydroxyl content, and sulfonation as a result of modifying lignosulfonates with hydroxybenzyl alcohol allowed for better dye dispersion capabilities. The adsorption of lignosulfonates onto dye was increased due to increased molecular weight and hydroxyl content, whereas the sulfonate groups caused stabilization through strong repulsive charges.

2.Fillers and dispersants for dye industry and pesticide processing.

Sodium lignosulfonate (CAS 8061-51-6) can be used as dispersant and filler for vat dyes and disperse dyes, which can increase the color power of dyes, make the coloring more uniform, and shorten the time of dye grinding. Sodium lignosulfonate can be used as filler, dispersant and suspending agent in pesticide processing, which greatly improves the suspension rate and wettability of wettable powder.

Flocculants are widely used to decrease the settling time of solutions/suspensions and/or to increase the amount of settled materials. Effective flocculants require good adsorption onto particles through both surface charge and molecular weight. Lignosulfonates and sulfonated lignin have long been exploited as flocculants.One study employed lignosulfonates to flocculate sulfur slurry used in copper heap leaching at a dosage of 0.2 wt % and improved its density from 40 to 67 %. The lignosulfonates used in this application did not interfere with other aspects of copper leaching.

Lignosulfonates have also been used as dust suppressants.Lignosulfonates were sprayed onto dirt roads and became viscous as water evaporated during drying; this trapped dust and prevented air pollution from particulate. Lignosulfonates are better alternatives than other types of dust-prevention chemicals (i.e., calcium chloride) because they are more efficient.

Lignosulfonates provide a better road-surface coverage and decreased maintenance requirements through improved surface drainage.Lignosulfonates are also nontoxic, noncorrosive, and biodegradable; these factors reduce their potential environmental impact compared with synthetic alternatives.38 However, a major disadvantage of the use of lignosulfonates in this area is their water solubility. In this case, lignosulfonates may leach from the surface of the road during heavy rainfall.

5.Binders for powdery and granular materials.